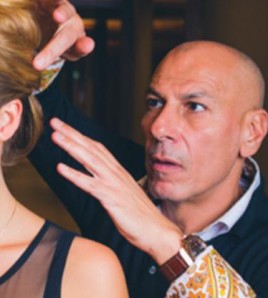 Marcel Reboh is a celebrated hairdresser and Co-Founder of Femme Coiffure currently at the InterContinental Hotel and Mamilla Hotel in Tel Aviv and Jerusalem. Marcel developed an intense interest in hairstyling at a very young age, always tending to his sister’s tresses. He quickly discovered that he was both artistic and creative and could invent styles on his own. Marcel then decided to study hairdressing in Paris at Alexandre, and then in Montreal and Miami. At the age of 18, Marcel launched his professional career and has been in the beauty industry for 3 decades.

Marcel is a hair designer and educator in his salons in Israel. To his credit, Marcel has styled celebrities such as Barbara Walter, Joan Rivers and Mary Tyler Moore. This a-list client led to referrals and ultimately working with additional celebs including Sharon Stone, Paris Hilton, Claudia Schiffer and Cindy Crawford. Professionally, Marcel travels frequently between Paris and Italy, and most recently styled the Kardashians in Paris and Italy for Kim Kardashian’s prestigious wedding to Kanye West and also the French singer Helene Segara. Marcel Reboh is currently developing a new product line in Israel with Keratine.